A Room With A View at LA Theatre Works 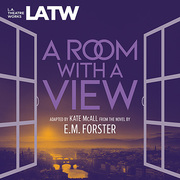 Biting social satire and passionate romance are set in motion when Lucy Honeychurch and chaperone Charlotte Bartlett find themselves in Florence with rooms without views, and fellow guests Mr Emerson and son George step in to remedy the situation. Julian Sands — who starred as young George Emerson in the 1985 Merchant Ivory film version — returns to the story as Mr. Emerson senior in this LATW-commissioned stage adaptation of the E.M. Forster novel. Written and directed by the BBC’s Kate McAll, A Room With A View also stars rising young British stars Eugene Simon (Game of Thrones) as George, Eleanor Tomlinson (Poldark on PBS) as Lucy, and Rosalind Ayres (Titanic) as Charlotte. Each of the four performances at UCLA’s state-of-the-art James Bridges Theater will be recorded live in front of an audience for future radio broadcast, distribution on CD, digital download and online streaming. L.A. Theatre Works' syndicated radio theater series broadcasts weekly on public radio stations across the U.S. (locally, in Southern California, on KPFK 90.7 FM); can be heard daily in China and around the world on the Radio Beijing Network; can be downloaded as a podcast via iTunes and NPR One; and can be streamed on demand at www.latw.org. March 1 – March 3; L.A. Theatre Works @ the James Bridges Theater, UCLA School of Theater, Film and Television, 235 Charles E. Young Drive, Los Angeles, CA 90095; $15-$65; (310) 827-0889; www.latw.org

RSVP for A Room With A View at LA Theatre Works to add comments!