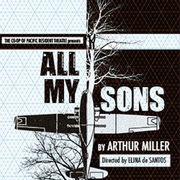 Winner of the New York Drama Critics Circle Award for Best New Play, and recipient of numerous Tony Awards, this electrifying family drama remains as timely as it is timeless.

Arthur Miller’s Tony Award Winning "All My Sons" first opened in 1947. It was inspired by a story from an Ohio Newspaper on an aircraft factory’s troubled contracts during WWII. The entire play takes place over one day in the yard of the Midwestern home of the Keller’s in August 1946. Kate, Joe and Chris Keller’s home is a neighborhood hub, on this day the expected and unexpected return of two former neighbors, Ann and George, stir up the secrets of the past and expose who is family and how we justify the sacrifice we make for family.

Miller placed “the common man” at the center of his tragic stories. “The quality in such plays (tragedies) shake us…from the underlying fear of being displaced. Among us today this fear is as strong, and perhaps stronger, than it ever was. In fact, it is the common man who knows this fear,” said Miller (1949).

Directed by Elina De Santos with a sure hand and brilliant understanding of the frailties of human nature. [Actors] completely inhabit their emotionally challenging roles and draw you into this tight tale” - Broadway World

RSVP for All My Sons to add comments!