An American Saga Revival of - Gunshot Medley: Part I 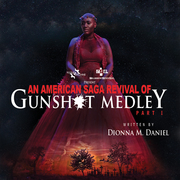 A lyrical and mystical play with live music, about the struggle against systemic racism. Set in a haunted North Carolina graveyard this intricately crafted work brings past and present together in a soulful tale of lives destroyed by deep-seated tensions and conflicts that have marred America's history from antebellum south to the present day.Written by Dionna Michelle Daniel / Directed by Desean Kevin Terry.

RSVP for An American Saga Revival of - Gunshot Medley: Part I to add comments!