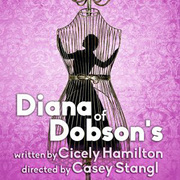 A rare revival of Cicely Hamilton’s romantic comedy, an unexpected hit of the 1908 London season. When poorly paid worker Diana inherits enough money to free her from a lifetime of drudgery, she impulsively decides to spend it all on a madcap, month-long taste of the high-life. But what she learns about love, money and society is as timely in 2019 as it was at the turn of the 20th century. April 11-June 3; $15-$35; Kiki & David Gindler Performing Arts Center, 110 East Broadway, Glendale, CA 91205; (818) 506-1983 or www.antaeus.org.

RSVP for Diana of Dobson's at Antaeus Theatre Company to add comments!