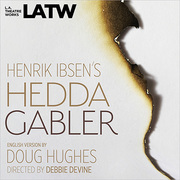 Henrik Ibsen created one of literature’s most compelling characters in the beautiful and enigmatic Hedda, a woman who feels trapped and suffocated in her marriage. Hedda has just returned from her honeymoon with George, but finds herself ill-suited to the role of a housewife. Her desperate dissatisfaction leads to dangerous choices in this exhilarating contemporary adaptation by Doug Hughes. Debbie Devine directs Jocelyn Towne (LATW productions of God of Carnage, Fathers and Sons and Amadeus, TV’s The Kominsky Method. Lodge 49) in the title role.. Each of the four performances at UCLA’s state-of-the-art James Bridges Theater will be recorded live in front of an audience for future radio broadcast, distribution on CD, digital download and online streaming. L.A. Theatre Works' syndicated radio theater series broadcasts weekly on public radio stations across the U.S. (locally, in Southern California, on KPFK 90.7 FM); can be heard daily in China and around the world on the Radio Beijing Network; can be downloaded as a podcast via iTunes and NPR One; and can be streamed on demand at www.latw.org. June 28-30; L.A. Theatre Works @ the James Bridges Theater, UCLA School of Theater, Film and Television, 235 Charles E. Young Drive, Los Angeles, CA 90095; $15-$65; (310) 827-0889; www.latw.org