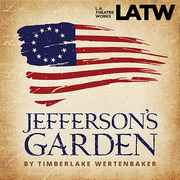 Gregory Harrison stars as Thomas Jefferson in a gripping, powerful and timely play by internationally acclaimed playwright Timberlake Wertenbaker (Our Country's Good) that brings a fresh slant and theatrical inventiveness to the story of the American Revolution. Martin Jarvis, OBE directs five performances of Wertenbaker's stirring, action-packed tale about the elusive nature of freedom that was a smash hit at England's Watford Palace Theatre. Each of the five performances at UCLA's state-of-the-art James Bridges Theater will be recorded live in front of an audience for future radio broadcast, distribution on CD, digital download and online streaming. L.A. Theatre Works' syndicated radio theater series broadcasts weekly on public radio stations across the U.S. (locally, in Southern California, on KPFK 90.7 FM), can be heard daily in China and around the world on the Radio Beijing Network, and can be streamed on demand at www.latw.org. Live performances March 23-March 26 at 8 PM also March 25 at 3 PM and March 26 at 4 PM; James Bridges Theater at UCLA's School of Theater, Film and Television, 235 Charles E. Young Drive, Los Angeles, CA 90095; $15-$60; 310.827.0889; Join us on Facebook at www.facebook.com/LATheatreWorks; follow us on Twitter @latheatreworks