Latina Christmas Special brings joy and laughter for the holidays 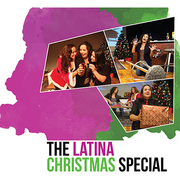 You thought your holidays with the family were dramatic? Wait until you hear these touching and hilarious Christmas stories of holidays past from three first-generation Latinas: the Texas-born, Mexican American Valls (Showtime’s Latin Divas of Comedy); Miami-born, Cuban-American Yanez (Margaret Cho’s The Sensuous Woman); and, the daughter of “an over-dedicated Mexican mother and compliant Lithuanian father,” Russell (Warner Brothers/New Line Cinema's Lights Out). When these three sassy friends get together, they drink plenty of tequila, dish about everything from moms to cucarachas to Farrah Fawcett, and share their funny and surprisingly personal stories of childhood Christmas “dramas.”

“These stories touch each and every audience member, no matter their background, on many different levels,” Rivas says. “They are also a window into some of the beautiful traditions we have within the Latino community.”

According to Yanez, “The ‘special’ in the title is an homage to all the TV shows we watched growing up — all those ‘Christmas Specials’ that we so closely identified with during the holidays, but that had no Latinos in them (or maybe just Jose Feliciano).”

Last year Rivas, who had seen an earlier version, offered to direct and bring the show to The LATC where it was a huge success. In its “Critic’s Choice” review, the Los Angeles Times called Rivas’ production “hilarious and heartwrenching… [a] very special ‘Special’,” and Stage Raw hailed its “universal humor, gumption, sass and hearts brimming with dynamic stories.”

RSVP for Latina Christmas Special brings joy and laughter for the holidays to add comments!

Susan Johnston has been accepted to Rolling Stone Culture Council, a community of thought leaders and tastemakers shaping industry futures. at Los Angels