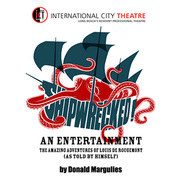 How much are we willing to blur the line between fact and fiction in order to leave our mark on the world? Inspired by the real-life autobiography of Louis de Rougemont, Pulitzer Prize-winning playwright Donald Margulies celebrates the power of storytelling with a fantastical theatrical adventure sure to bring out every audience member’s inner child. Luke Yankee directs Shipwrecked! for an October 14 opening at International City Theatre.

In 1898, Louis de Rougemont’s amazing story of 30 years of adventure in the Australian outback left 19th century England spellbound, his astonishing tales of bravery, survival and exotic locales turning him into an instant celebrity. But was it real, or just a figment of his imagination? Fully titled Shipwrecked! An Entertainment — The Amazing Adventures of Louis de Rougemont (as Told by Himself), this family-friendly frolic dares audiences to be whisked away by Rougemont’s fascinating account of the high seas, a narrative populated by exotic islanders, flying wombats, giant sea turtles and a monstrous man-eating octopus.

"The magic of theater is its power to astonish, but astonishment can occur only if the audience is willing to suspend its disbelief,” said Margulies in an interview. “My aim with Shipwrecked was to capture the attention of the hidden child in everyone in my audience. I wanted to write a play that would make no attempt to replicate onstage what television and movies do, but would instead celebrate the uniqueness of theater.”

Growing up in Brooklyn, New York, Margulies’ love of theater was fostered early by his father, who, despite his low income, found a way to take his children to see plays and musicals on Broadway.  He won the OBIE Award for Best New American Play for Sight Unseen and Dinner With Friends, won the 2000 Pulitzer Prize. He currently lives in New Haven, Connecticut, where he teaches playwriting at the Yale School of Drama.