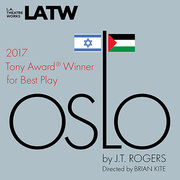 The darkly funny, sweeping and surprising true story of the back-channel talks, unlikely friendships and quiet heroics that led to the Oslo Peace Accords between the Israelis and Palestinians. Playwright J.T. Rogers presents a deeply personal story set against a complex historical canvas: a story about the individuals behind world history and their all too human ambitions. Anthony Azizi recreates the role of Palestinian finance minister Ahmed Qurie that he created in the 2017 Tony Award-winning Broadway production. Also in the cast: Usman Ally (A Series of Unfortunate Events) as Palestinian delegate Hassan Asfour; Edita Brychta (BBC Radio 4's Me Cheetah: My Life in Hollywood), Matthew Floyd Miller (Broadway: Not About Nightingales), Darren Richardson (Velvet Buzzsaw), voice actor André Sogliuzzo (Family Guy, American Dad, Lego Star Wars, Castlevania) and Kevin Weisman (Marvel's Runaways), each taking on multiple roles. Directed by Brian Kite, current chair of theater for UCLA’s School of Theater, Film and Television, and former artistic director of the La Mirada Theatre for the Performing Arts. Each of the four performances at UCLA’s state-of-the-art James Bridges Theater will be recorded live in front of an audience for future radio broadcast, distribution on CD, digital download and online streaming. L.A. Theatre Works' syndicated radio theater series broadcasts weekly on public radio stations across the U.S. (locally, in Southern California, on KPFK 90.7 FM); can be heard daily in China and around the world on the Radio Beijing Network; can be downloaded as a podcast via iTunes and Wondery.com; and can be streamed on demand at www.latw.org. April 12-14; L.A. Theatre Works @ the James Bridges Theater, UCLA School of Theater, Film and Television, 235 Charles E. Young Drive, Los Angeles, CA 90095; $15-$65; (310) 827-0889; www.latw.org

RSVP for Oslo at LA Theatre Works to add comments!