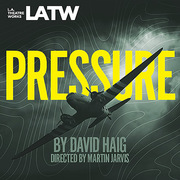 Jonathan Cake (The Affair, Desperate Housewives) stars as Scottish meteorologist James Stagg in the U.S. premiere of David Haig’s intense, real life thriller. It’s June, 1944 — just 72 hours prior to the D Day landings — and Stagg is advising General Eisenhower on the weather conditions likely to prevail when 350,000 troops are to be sent across the Channel in Operation Overlord. But with Stagg predicting severe storms and Irving P. Krick — Hollywood’s meteorological movie consultant — predicting beautiful weather, the future of Britain, Europe and the United States rests on one single forecast. Each of the four performances at UCLA’s state-of-the-art James Bridges Theater will be recorded live in front of an audience for future radio broadcast, distribution on CD, digital download and online streaming. L.A. Theatre Works' syndicated radio theater series broadcasts weekly on public radio stations across the U.S. (locally, in Southern California, on KPFK 90.7 FM); daily in China and worldwide on the Radio Beijing Network; weekly on KCRW Berlin 104,1 FM, Berlin's English language public radio station; can be downloaded as a podcast via iTunes and NPR One; and can be streamed on demand at www.latw.org. Oct. 4 - Oct. 6; L.A. Theatre Works @ the James Bridges Theater, UCLA School of Theater, Film and Television, 235 Charles E. Young Drive, Los Angeles, CA 90095; $15-$65; (310) 827-0889; www.latw.org