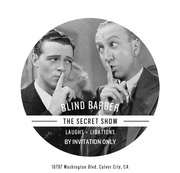 The Blind Barber is a secret speakeasy bar in the back of an old-timey barbershop. You have to literally walk through an old barbershop through an unmarked door that opens into the bar. It’s one of the most fun places I’ve ever been to drink, so we decided to produce a monthly comedy show there.

The show is FREE, but you have to be on the guest list to get in. You won’t make it past the barber shop if you don’t get on the list. Email barbersecretshow@gmail.com to get on the list! Address is 10797 Washington Blvd, Culver City

Bring your dapper selves out to our night of tomfoolery.