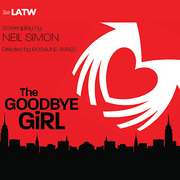 SAG Award-winner Amy Pietz (Hit the Road, No Tomorrow, The Office, Caroline in the City) stars in the title role when L.A. Theatre Works records Neil Simon’s screenplay for the 1977 Academy Award-nominated, Golden Globe Award-winning romantic comedy. Known as “The Goodbye Girl” because of all the live-in boyfriends who have left her, Paula McFadden and her young daughter, Lucy (Raini Rodriguez of Austin & Ally and Paul Blart: Mall Cop 1 & 2), must make room in their cramped quarters for a new roommate. But can they make room in their hearts for another man who may just walk out that door again? Each of the five performances at UCLA’s state-of-the-art James Bridges Theater will be recorded live in front of an audience for future radio broadcast, distribution on CD, digital download and online streaming. L.A. Theatre Works' syndicated radio theater series broadcasts weekly on public radio stations across the U.S. (locally, in Southern California, on KPFK 90.7 FM); can be heard daily in China and around the world on the Radio Beijing Network; can be downloaded as a podcast via iTunes and Wondery.com; and can be streamed on demand at www.latw.org.

RSVP for The Goodbye Girl to add comments!