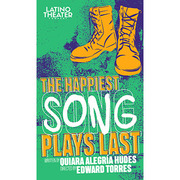 Set to the joyful sounds of traditional Puerto Rican folk music, this poignant play — the final installment in Hudes’ three-play “Elliot cycle,” which began with the Pulitzer Prize-finalist Elliot, A Soldier’s Fugue and Pulitzer Prize-winner Water by the Spoonful — chronicles a year in the life of two kindred souls as they search for love, meaning and a sense of hope in a quickly changing world. At the dawn of the Arab Spring in an ancient Jordanian town, an Iraq War veteran struggles to overcome the traumas of combat by taking on an entirely new and unexpected career: an action-film hero. At the same time, halfway around the world in a cozy North Philadelphia kitchen, his cousin takes on a heroic new role of her own: as the heart and soul of her crumbling community, providing hot meals and an open door for the needy. Directed by Edward Torres, who directed the world premiere production at the Goodman Theatre in Chicago, and featuring live music by Grammy Award-winning tres guitar player Nelson González. Feb. 22 through March 19 at The Los Angeles Theatre Center, 514 S. Spring St., Los Angeles, CA 90013; $24- $52; For reservations and information, call (866) 811-4111 or go to http://thelatc.org.

RSVP for The Happiest Song Plays Last to add comments!