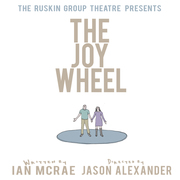 Life is changing for Frank and Stella. On the day of Frank's retirement party, this once loving and simple couple find themselves pulled in different directions as the winds of change blow through Joy, Illinois. The world is not what it was. Joy is not what it was. Stella is shaken, but inspired, by her best friend becoming a liberated, sexualized, independent woman, while Frank decides to emulate his doomsday prepper friend by building an underground bunker that once was the family swimming pool. It’s as if all of them are riding the Joy Wheel, hanging on to someone else so they can stay their ground.

Ruskin Group Theatre launched the World Premiere of Rex Pickett’s Sideways The Play, picked up by La Jolla Playhouse and now slated for New York, as well as the project Paradise, A Bluegrass Musical Comedy. Ruskin’s Healing Through The Arts program brings their actors into Mattel Children’s Hospital UCLA, where they are working with the Chase Child Life Program, to work with and entertain the patients. The CAFÉ PLAYS, created by RGT, are produced and now celebrating their 12th anniversary. RGT supporters Dylan McDermott, Ed Asner, Chris Mulkey, Olivia d'Abo, and other industry celebrities joined to produce the Best of Café Plays (both shows sold out within hours) for their 10thseason. Anthony Hopkins, David Mamet, Tony Franciosa, and Ed O’Neill are just some of the noted guests to have taught Master classes at the Ruskin.

RSVP for The Joy Wheel to add comments!

Bella Stewart is now a member of Culver City Times
2 hours ago
Welcome Them!