The Secret Show at the Blind Barber April 24 8pm 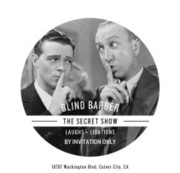 Bring yourselves out to a night of guffaws and foofaraw at The Blind Barber. The next Secret Show happens on Wednesday, April 24th at 8 p.m.

The Blind Barber is a secret speakeasy bar in the back of an old-timey barbershop. You have to literally walk through an old barbershop through an unmarked door that opens into the bar.

The show is FREE, but you have to be on the guest list to get in. You won’t make it past the barber shop if you don’t get on the list. Email barbersecretshow@gmail.com to get on the list! The bar opens at 7 p.m. only for people on the list, so you can come and hang out and drink at a fun speakeasy bar and then watch an awesome comedy show. Address is 10797 Washington Blvd, Culver City.

Plus the Blind Barber crew - Andy Peters, Dave Waite, and Nick Anthony (Grant Lyon will be out of town)

Bring your dapper selves out to our night of tomfoolery.

RSVP for The Secret Show at the Blind Barber April 24 8pm to add comments!