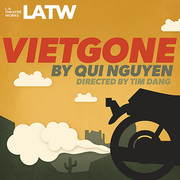 Qui Nguyen’s hilarious, “probably-mostly-true” version of how his parents met and built a life for themselves in a new land. Set in 1975 — just after the fall of Saigon — this epic, award-winning play repurposes pop culture from the last 40 years to tell the story of two Vietnamese refugees who meet in an Arkansas relocation camp before setting out on a rip-roaring road trip across America. Equal parts buddy story, all-American romance and motorcycle adventure, Vietgone sizzles to a smart, sassy and raucous hip-hop soundtrack. Each of the four performances at UCLA’s state-of-the-art James Bridges Theater will be recorded live in front of an audience for future radio broadcast, distribution on CD, digital download and online streaming. L.A. Theatre Works' syndicated radio theater series broadcasts weekly on public radio stations across the U.S. (locally, in Southern California, on KPFK 90.7 FM); daily in China and worldwide on the Radio Beijing Network; weekly on KCRW Berlin 104,1 FM, Berlin's English language public radio station; can be downloaded as a podcast via iTunes and NPR One; and can be streamed on demand at www.latw.org.

RSVP for Vietgone at LA Theatre Work to add comments!