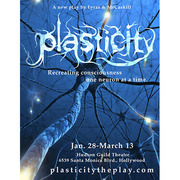 A comatose man re-emerges into consciousness in a multilayered, multimedia theatrical event about the miraculous power of the brain to re-wire and heal itself. Blending cutting-edge science with masterful storytelling, Ovation, Los Angeles Drama Critics Circle and LA Weekly award-nominated co-writers Alex Lyras and Robert McCaskill team up with two-time Grammy Award-nominated composer Ken Rich, visual artist Corwin Evans and three-time Emmy Award-winning editor Peter Chakos to take the audience deep inside his memories, even as a hovering circle of family members and loved ones (all played by Lyras) divide into scheming camps over critical neurological decisions. A profound, often comedic tour of the collective unconscious. Jan. 28 through March 13, Saturdays at 8 p.m., Sundays at 7 p.m. & Mondays at 8 p.m.; $30; Hudson Guild Theatre. 6539 Santa Monica Blvd., Los Angeles, CA 90038. For info and tix call (323) 960-7787 or go to www.plasticitytheplay.com.