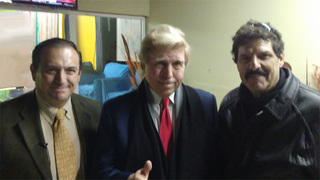 Staff and guests were caught by surprise, and ended up taking photos with the actor.

It was as if President Trump himself showed up.

Allman is scheduled to appear at various locations and stations throughout the country, promoting harmony and global peace, through a documentary, “The Winds of Freedom,” that he produced with Alex Ayzin.

Trained actors and performers, both Allman and Rossi have had roles in a number of feature films. Allman, who is known for his performances in Las Vegas, was host of the half hour shows, “The Las Vegas Hollywood Report,” and “CMX Sports and Entertainment,” is within a year of President Trump’s actual age.

As a Trump clone, Pete Allman captures audiences everywhere he travels. He was most recently introduced by State Senator Ben Allen, at The New West Symphony, where Smokey Robinson and his wife received a Proclamation for their philanthropy work.

People’s reactions to Allman range from laughter to hateful comments, but Allman takes it all in stride and rolls with the punches. The interesting fact is, unlike other actors who impersonate President Trump, and use hairpieces, along with prosthetic makeup, Pete Allman wakes up every day looking like Donald Trump naturally. That is what has launched him to be the number one Trump look-alike in the world.

Having interviewed President Trump on several occasions, Allman never thought his career as an actor would take off the way it did. His attitude is, “if you got it, you might as well go along with it.”

Vince Neill is an entertainment writer and the CEO of Xtreme Entertainment in Los Angeles, California.