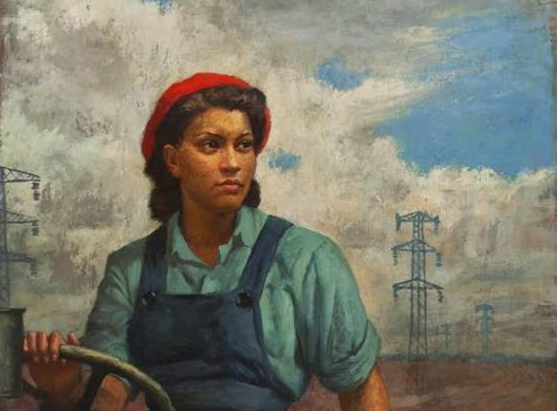 Founder Justinian Jampol keeps buying, often in bulk, and sometimes directly from Eastern European governments—which are glad to get rid of the stuff. Among the recent acquisitions: About 60 Hungarian artworks auctioned in February, including Béla Czene’s socialist-realist Trucker Girl (a detail of which is at the top of this page). The trove turned up in the basement of the former secret police headquarters.

The mission of the Wende Museum is to preserve the cultural artifacts and personal histories of Cold War-era Eastern Europe and the Soviet Union to inform and inspire a broad understanding of the period and its enduring legacy.

The museum is open to the public Monday through Thursday by appointment only from 10 A.M. to 5 P.M. (except on holidays). To schedule an appointment, call 310-216-1600 x305 or email ccuevaswolf@wendemuseum.org.

The museum is open without appointment on Fridays from 10 A.M. to 5 P.M. and a tour of the Museum’s vault is offered every Friday at 3 P.M. Admission is free.