WHAT:  HFH GLA is teaming up with Lowe’s for the 2nd year to host its premiere build event.  Volunteers will frame walls for new, decent, affordable and sustainable homes to be constructed in the local community in 2013.

The first day of this high-profile event is the 8th Annual Power Women Power Tools (PWPT) build day which will bring together over 200 high-profile female executives from various sectors, including corporate, government, faith and the entertainment industry, for a one of a kind building experience.  The second day is the annual Hollywood for Habitat for Humanity Build-A-Thon (HFHFH BAT) that will engage another 200 volunteers, both male and female from the same fields. 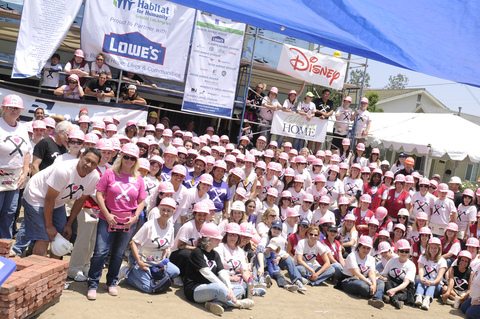 Since 2011, HFH GLA has impacted the lives of approximately 2,400 veterans through its Veterans Initiative.  Veteran partner homeowners will have a presence at both events and Bea Cohen, who at age 102 is California’s oldest living female World War II veteran, will be a distinguished guest speaker and honorary host at the Power Women Power Tools Build Day.

These events would not be possible without the generous support of Lowe’s, the Title Corporate Partner and Diamond Hammer Sponsor.  We also would like to thank Sony Pictures Studios for hosting the 2-day build event on their studio lot.

Helen Hunt (As Good As It Gets)