Culver City is about to be invaded by giant, pixelated space-creatures. On Tuesday the 14th, the Culver City Cultural Arts commission unanimously selected the proposal of local artist Jason Torchinsky to temporarily install 4 to 6 large three-dimensional renditions of the iconic Space Invaders from 80s video games. The Culver City Council will likely accept the commission's recommendation later this month.

The sculptures, which will stand 10 feet by 8 by 3 feet (more or less), will be constructed from plywood. The invaders will be painted white (possibly luminescent) and the saucer will be painted red.

Earlier in the year, the City of Culver City sought the submission of proposals for a game-themed temporary art installation in conjunction with the 2011 IndieCade International Festival of Independent Games, a "fun-filled celebration of independent games from around the world" that will be held this October 6 through 9 in Downtown Culver City.  The artwork is meant to help increase the number of visitors to the event and spotlight the role of IndieCade -- an alliance of industry producers and leaders that supports independent game development and the maintenance of the artistry in the entertainment software industry. 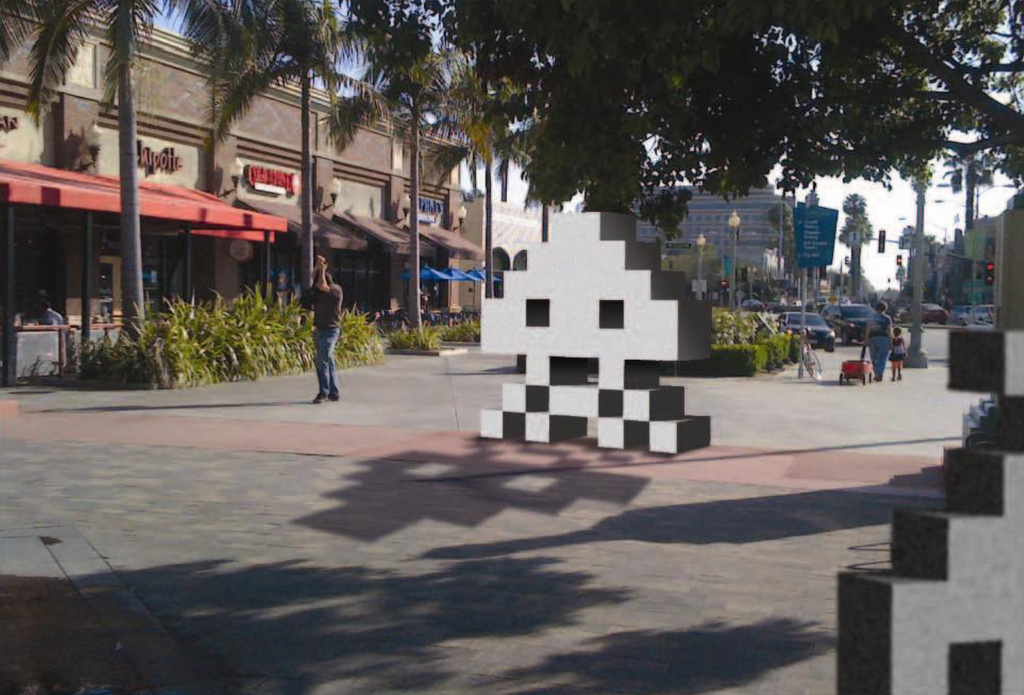 The artist, Jason Torchinsky, gained some notoriety for exhibiting at the Machine Project Gallery in Echo Park a giant, functioning Atari 2600-styled joystick so large that took three people to work. Torchinsky also serves as an instructor and the Head of Digital Design for the Visual Arts and Humanities, a pilot school in the LAUSD at the district's RFK center west of downtown LA.

Says Torchinsky, "Invaded takes iconic images from the golden age of vide games and places them in a new, aggrandized context to create a sense of wonder and fun. The installation is highly visible and immersive, inviting people to come and interact with the pieces and to explore the space around them in a whimsical manner that references vintage video games, alien invasion movies, and nostalgic technology.“