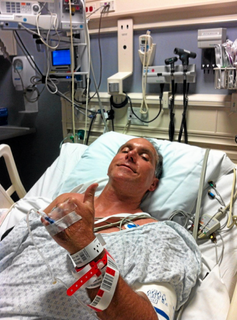 On July 19 at 6 pm, Bill Fournell was riding his bike on the Ballona Creek Bike Path between Duquesne Avenue and Higuera Street when he was assaulted by three males in their late teens. One of them slung his bicycle under Fournell's tire as he was riding by, and Fournell went over the handlebars, breaking his collarbone and ribs and puncturing a lung. A tussle ensued for Fournell's bike, and the teens ran off.

I've read several articles about this attack but they all left out key details, including exactly where the attack occurred. It's not like the bike path is one place. Thankfully, The Daily Breeze finally printed a compete story, which you can read HERE.

This bike path is a beautiful feature of Culver City -- and a key resource for the health of its citizens. It's essential that this bike path is safe, and I'm not the only one who thinks so. A petition has been created on change.org that urges the Culver City council to support the assignment of police patrols to the path. You can sign it HERE.

Now, as Biking In LA notes, if only we can get patrols in the LA City and County sections of the bikeway, as well.

I ride on the Ballon Creek bike path from approximately the 405 to the sea several times a week (usually in the early evening), and my experiences along the bike path have been almost universally excellent. I've encountered some "sketchy" people along the way, but mostly there are a lot of bike riders, walkers, mothers pushing strollers, joggers, etc., enjoying this amazing resource. I do think that safety is critical to the continued success of the path, though. So I would strongly support all efforts to keep it a place where everyone feels comfortable.

This has been an issue on the bike path for years.

I've been forced to avoid post-morning rides there.... for some reason, thuggery has an aversion to early morning activity.

Comment by Diane Williams on August 7, 2013 at 8:23am
Thanks for sharing this. My husband rides that path twice a week. I'm always worried, now this. We definitely need to make it safer