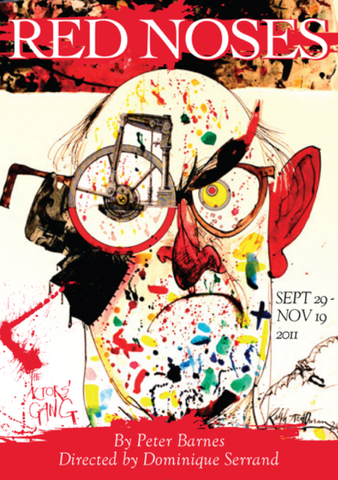 Red Noses is a dark comedy set in 1348, France. The Black Death decimates Europe, killing one third of the population. Scavengers ravage the dead. Zealots self-flagellate seeking to defy death in Christ’s purification. The church all but deserts the populace. In this hopeless time, one priest will do the unimaginable…make people laugh.

The play's author, Peter Barnes, is probably best known for the play The Ruling Class, which was made into an outrageous movie in 1972, starring a scenery-chewing Peter O'Toole. Originally presented in London in 1985 as the AIDS epidemic grew, Red Noses won the Olivier Award for Best Play.

Says director Dominique Serrand of his choice to direct Peter Barnes’ masterpiece in 2011, “Red Noses pulsates with relevance today …this is market turmoil, cut social security, kill healthcare and sacrifice public education season. Far from us to exult in turmoil, we have chosen Peter Barnes play for its extraordinary sense of togetherness and optimism.”