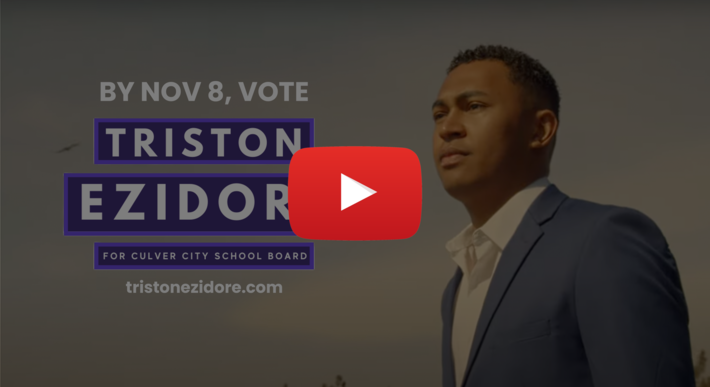 Today, Triston Ezidore - candidate for Culver City School Board, released his campaign video. In his announcement, Ezidore says, “My life has taught me that we can’t throw people away. In order to implement transformative education policy, we have to elect people committed to centering the folks closest to the pain. We don’t get what we don’t fight for, and I’m running for school board to fight for you. As ballots begin arriving in mailboxes next week, allow me to underscore how crucial this election is. Make no mistake, the well-being of our students, faculty, and staff is on the ballot. I'm asking you to believe—not in my ability to create change, but in yours. I believe in change because I believe in you. I hope you’ll join me.”

In the heartfelt video, Ezidore details his personal experiences with our public school systems saying, “When I was a student in the district I was what we would call a frequent flier. I would come into class late, I’d be disengaged during instruction, and walk around campus during class. This doesn’t mean that I didn’t obtain the capability to learn, it’s just that when I crossed the threshold I brought these life experiences with me.”