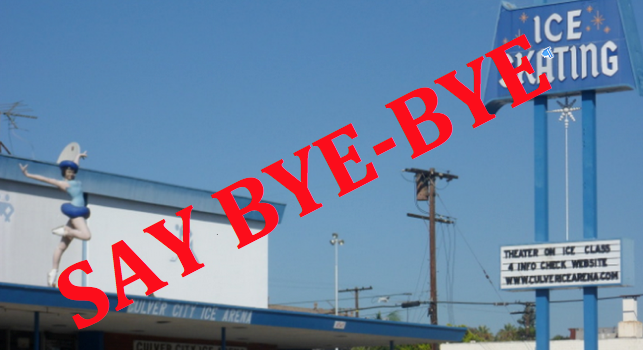 I imagine that, in the absence of an organized objection to this proposal, the planning commission will give it a stamp of approval. If you don't like the sound of this, head on down to the public hearing to let them know.

The backstory: The beloved Culver City Ice Skating Rink has been closed since February of 2014, when the ice rink lost it's lease. At that time, rock-climbing company Planet Granite seemed prepared to take over the property but then backed out of the lease -- likely a reaction to the negative public outcry that greeted the company's plans as well as to the unearthing of a city document that indicated that a special Use Variance granted in 1960 limited the property's use to the rink. The table seemed set for the rink to re-open, until the city released a special report detailing the somewhat deplorable -- and potentially dangerous -- condition of the rink. In March of 2014, the property owner decommissioned the arena, and the property has remained unused for the last year -- and is increasingly a nexus for tomfoolery of all kinds.

No new building square footage or demolition is proposed and the surface parking will be improved to be consistent with current code standards. The project will also include a Zoning Code Map Amendment to change the Residential Single Family (R1) zoned portion of the site to Commercial General (CG) making it consistent with its General Plan Land Use Designation of General Corridor.