Where Am I in Culver City? Game 077 Solution 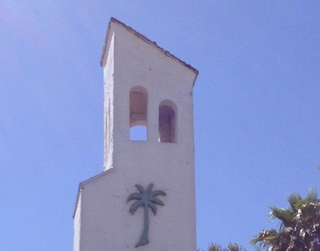 Culver City Times member Daisy Camarena correctly identified the tower as belonging to the El Baron restaurant and nightclub, at 8641 Washington Blvd., between the Helms Complex and the Culver City Arts District. It was Daisy's first time playing our game, so...excellent!!

The Yelp reviews for this place are decent, with many folks praising the restaurant's pupusas. One Yelp user also says, "Nice place to go to if you want to dance merengue, cumbia, and salsa on a Saturday night."

Culver City Times member Doug Lemon, who supplied the original pic for this week's game, tells me that there's a rumor that the reason the tower is adorned with a palm tree is that the place was once called Las Palmas. Can anyone out there confirm?