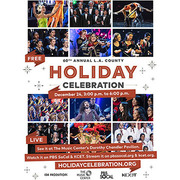 L.A.’s largest holiday spectacular celebrates its 60th anniversary in 2019. Join this year’s co-hosts, internationally acclaimed mezzo-soprano Suzanna Guzmán and actress Marissa Ramirez (Blue Bloods), for this free, three-hour holiday show featuring 25 music ensembles, choirs and dance companies from the many neighborhoods and cultures that make up L.A. Once again, PBS SoCal will host a live broadcast of the event that has been a Los Angeles holiday tradition since 1959, while KCET will air the program twice on Christmas Day. Legendary Cuban jazz trumpet player Arturo Sandoval, accompanied by his world-renowned band, will kick off this year’s celebration with a medley of holiday songs. Returning favorites include Hālau Keali’i o Nālani & the Daniel Ho Trio, the Gay Men's Chorus of Los Angeles, gospel choir Greater LA Cathedral Choir, Jung Im Lee Korean Dance Academy and folklorico troupe Pacifico Dance Company. Some of this year’s newcomers include Latin folk band Cuñao, the dancers and drummers of African Soul International and a cappella group Street Corner Renaissance. All female, two-time GRAMMY award-winning Mariachi Divas de Cindy Shea will team up with their “brother” band Mariachi Espectacular, and Jewish cultural revival band Mostly Kosher will share the stage with Urban Voices Project, a choir made up of men and women surviving homelessness on Skid Row. Those who can't make it to The Music Center on Dec. 24 can watch the live broadcast on PBS SoCal starting at 3 p.m., with the rebroadcast on KCET on Christmas Day from 12 p.m. – 3 p.m. and 7 p.m. – 10 p.m., or online at pbssocal.org/holidaycelebration. To see the show live at The Music Center on Dec. 24 from 3 p.m.-6 p.m., arrive early – the line forms around 12 noon; doors open at 2:30 p.m.; first come, first served; Dorothy Chandler Pavilion, 135 N. Grand Ave., Los Angeles, 90012; Admission and parking are FREE; Information hotline: (213) 972-3099 or MusicCenter.org/holidaycelebration.