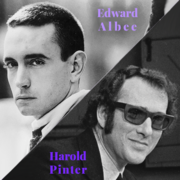 Harnessing the flair of two iconic playwrights, Pacific Resident Theatre delights in offering a pair of meaty dark comedies. A retrospective of two early one acts, both first produced in 1960, the plays are running in tandem. Tony Award winners Edward Albee and Harold Pinter, who have left indelible marks in world theatre, give voice to the outlandish and amusing behavior of humans.

Albee’s Fam and Yam, set in an upper Eastside penthouse, examines an encounter between two unnamed playwrights, one famous, one not. This brief curtain raiser is an eloquent example of Albee’s biting wit and incisive satire.

In Pinter’s The Dumb Waiter, two hitmen wait in a basement for their next assignment. Often called the best of Harold Pinter's early plays, it combines the classic characteristics of early Pinter – a paucity of information and an atmosphere of menace, working-class small-talk in a claustrophobic setting – with an oblique but palpable political edge, and can be seen as containing the germ of Pinter's entire dramatic oeuvre.

RSVP for Albee/Pinter to add comments!