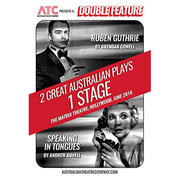 L.A.’s Australian Theatre Company offers a mini Australian theater festival, including a ‘Double Feature’ of two celebrated Australian plays that were made into movies and ATC’s second annual free reading series — all over the course of 3-1/2 weeks:

• Speaking in Tongues by Andrew Bovell (June 6 – June 27) — A noir psychological thriller that is a theatrical jigsaw puzzle of parallel stories: two couples set out to betray their partners… a lover returns from the past… a husband doesn’t answer the phone… and a neighbor is the prime suspect when a woman disappears.

• The U.S. premiere of Ruben Guthrie by Brendan Cowell (June 7 – June 28) — An affecting and darkly comic look at alcoholism and the impact of Australia ’s drinking culture. A heady cocktail of fizzy humor and touching revelation about a Sydney adman who spirals high, then crashes hard, it’s the story not only of his battle with the bottle — but also of the city that won't let him put it down. Is it un-Australian to refuse a drink?