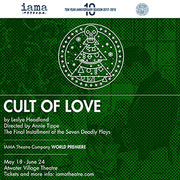 IAMA concludes its 10th anniversary with the final installment in Leslye Headland’s “Seven Deadly Plays” cycle — a black comedy that explores the final sin of “pride” through one family's feverish clash over who is right and who is crazy. The Dahl family gathers to celebrate Christmas in their rural Connecticut home. Raised as strict Christians and overachievers, the four adult children (along with their partners) have grown into varying degrees of belief and success. Their initially joyful reunion quickly reveals an American family riddled with competition, xenophobia and mental illness. May 18 through June 24: Fridays at 8 p.m., Saturdays at 8 p.m., Sundays at 7 p.m. IAMA Theatre Company at Atwater Village Theatre, 3269 Casitas Ave., Los Angeles, CA 90039; $20-$35; 323-380-8843; iamatheatre.com

RSVP for Cult of Love to add comments!