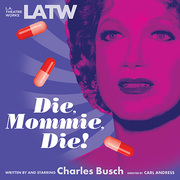 Charles Busch stars as Angela Arden, a role he created on both stage and screen, when L.A. Theatre Works records his camp send-up of ‘60s melodramas. Ex-pop singer Angela wants to be free of her suffocating marriage to sleazy film producer Sol Sussman. What better way than poison? Distraught by their father’s death and convinced of Angela’s guilt, her kids plot to get the truth out of their mother using any means necessary. Each of the four performances at UCLA’s state-of-the-art James Bridges Theater will be recorded live in front of an audience for future radio broadcast, distribution on CD, digital download and online streaming. L.A. Theatre Works' syndicated radio theater series broadcasts weekly on public radio stations across the U.S. (locally, in Southern California, on KPFK 90.7 FM); can be heard daily in China and around the world on the Radio Beijing Network; can be downloaded as a podcast via iTunes and Wondery.com; and can be streamed on demand at www.latw.org. May 17-19; L.A. Theatre Works @ the James Bridges Theater, UCLA School of Theater, Film and Television, 235 Charles E. Young Drive, Los Angeles, CA 90095; $15-$65; (310) 827-0889; www.latw.org