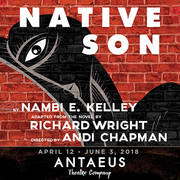 Richard Wright's iconic novel about oppression, freedom and justice comes to life on stage in this ground-breaking adaptation. Suffocating in rat-infested poverty on the South Side of Chicago in the 1930s, Bigger Thomas struggles to find a place for himself in a world whose prejudice has shut him out. After taking a job in a wealthy white man's house, Bigger unwittingly unleashes a series of events that violently and irrevocably seal his fate. Adapted with theatrical ingenuity by Nambi E. Kelley, this Native Son captures the power of Wright's novel for a whole new generation. April 12 – June 3; $15-$34; Kiki & David Gindler Performing Arts Center, 110 East Broadway, Glendale, CA 91205; (818) 506-1983 or www.antaeus.org.