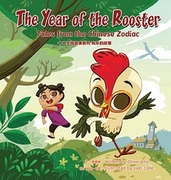 Join Oliver Chin in celebration of the Chinese New Year!  2017 is the Year of the Rooster, and the title of the twelfth and final adventure in Oliver Chin’s delightful annual series, Tales from the Chinese Zodiac. Ray is a young chick whose father wakes the town each day. When others spot the mythical phoenix, Ray tries to locate this legendary creature and learns about himself during the journey. Year of the Rooster features a bilingual translation in simplified Chinese. The books in the Tales from the Chinese Zodiac series feature empowering themes of self-discovery, cultural exchange, and mutual respect. For ages 3 to 8. FREE