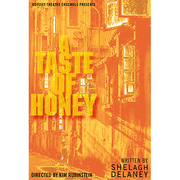 Kim Rubinstein, director of last season’s award-winning revival of ‘Anna Christie,’ returns to the Odyssey at the helm of one of the great defining and taboo-breaking plays of the 1950s, “A Taste of Honey.”

Playwright Shelagh Delaney was just 18 years old when this controversial play rocked the British theater community in May, 1958 with its exhilarating and honest depiction of harsh, working-class life in post-war England. The story of Jo, a working class adolescent girl, and her relationships with Helen, her saloon-frequenting mother; Peter, her mother’s newly acquired husband; Jimmie, the black sailor who makes Jo pregnant; and Geoff, the homosexual art student who moves into her apartment to help her through her pregnancy, ‘A Taste of Honey’ bursts with energy and daring, an explosive celebration of the vulnerabilities and strengths of the female spirit in a deprived and restless world.

“What I really love about the play is its exuberance, its vitality,” says Rubinstein. “It’s highly theatrical at the same that it’s realistic. It was one of the first plays to be called a ‘kitchen sink drama,’ yet the characters break the fourth wall to speak to the audience. In the original, there was a live jazz trio. We’ll have a bass player, and Sarah Saviano, our Helen, is a highly accomplished sax player. Gerard Joseph, who plays Jimmie, will be on drums.”

Rubinstein first came across the play as a pre-teen, when her mother took her to see the movie. “I was mesmerized by the working class world of Manchester and the complex truth of the relationships between the characters,” she says. “The idea that nothing is permanent. Everything keeps changing, everything is always shifting. How does one deal with that?  How do you learn to not cling to things you might have to give up? That’s still our biggest challenge in today’s world, which sometimes seems to be dissolving into chaos.”

Delaney said she wrote ‘A Taste of Honey’ in just two weeks, after seeing Terence Rattigan’s play, Variations on a Theme, which she felt was too discreet in its depiction of homosexuality. At the time, homosexuality was against the law in England, interracial relationships were taboo and single motherhood was stigmatized. Her play was first produced by Joan Littlewood's Theatre Workshop at the Theatre Royal Stratford East, a small fringe theater in London, then transferred to the larger Wyndham's Theatre in the West End.