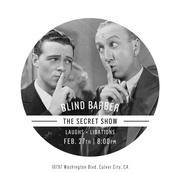 Welcome ladies and gents to a night of guffaws and foofaraw. The Blind Barber presents The Secret Show, a new comedy variety show in an old-timey speakeasy bar. You have to be in the know to find The Blind Barber as you literally have to walk through an old barbershop to an unmarked door in the back, and then it opens into a classy bar. It's the cat's pajamas.

We'll have jazz and old-timey sketches from Andy Peters and Grant Lyon. We'll also present the comedy stylings of comedians:

The show is FREE, but you have to be on the guest list to get in. You won't make it past the barber shop if you don't get on the list. Email grant@grantlyon.com to get on the list!

Bek is now a member of Culver City Times
Thursday
Welcome Them!