Too Much Sun at Odyssey Theatre 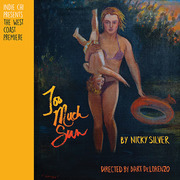 The West Coast premiere of the acclaimed off-Broadway hit by Nicky Silver (Broadway’s The Lyons). Celebrated actress Audrey Langham reaches her breaking point while rehearsing Medea in Chicago — walking off the stage, out of the production and into her married daughter’s summer house in Cape Cod, where her unexpected and unwelcome arrival sets off a chain of events alternately hilarious and harrowing. “Critic’s Pick… An unconditional treat… Mr. Silver is a dramatist with an original and thoroughly sustained tragicomic worldview.” — Ben Brantley, The New York Times. Indie Chi Productions presents a visiting production at the Odyssey Theatre, 2055 S. Sepulveda Blvd., West Los Angeles, 90025; Feb, 28 – April 21; $32-$37; (310) 477-2055 x2; www.odysseytheatre.com

RSVP for Too Much Sun at Odyssey Theatre to add comments!