Watch on the Rhine at LATW 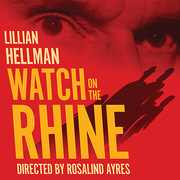 Set in Washington, D.C. on the brink of U.S. involvement in World War II, Lillian Hellman's suspenseful drama is a timely reminder to keep our eyes open, to remain vigilant and involved. As the clouds of war gather in Europe in the late 1930s, a leader in the German resistance arrives in Washington DC, accompanied by his American wife, Sarah and their children. The Müllers stay at the home of Sarah’s wealthy mother, Fanny Farrelly (Susan Sullivan), who, like most Americans at that time, is unaware of the storm brewing in Europe. Each of the five performances at UCLA’s state-of-the-art James Bridges Theater will be recorded live in front of an audience for future radio broadcast, distribution on CD, digital download and online streaming. L.A. Theatre Works' syndicated radio theater series broadcasts weekly on public radio stations across the U.S. (locally, in Southern California, on KPFK 90.7 FM); can be heard daily in China and around the world on the Radio Beijing Network; can be downloaded as a podcast via iTunes and Wondery.com; and can be streamed on demand at www.latw.org. Five live performances: Oct. 12 – Oct. 15 at the James Bridges Theater at UCLA’s School of Theater, Film and Television, 235 Charles E. Young Drive, Los Angeles, CA 90095; $15-$60; For more information or to purchase tickets, call (310) 827-0889 or go to www.latw.org. Join us on Facebook at www.facebook.com/LATheatreWorks; follow us on Twitter @latheatreworks.

RSVP for Watch on the Rhine at LATW to add comments!