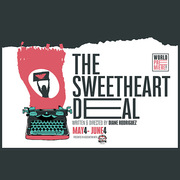 A woman finds her calling while volunteering for an underground political newspaper during the early years of the United Farm Workers movement. 1970 was a tumultuous time for Cesar Chavez and the UFW. Obie Award-winning writer/director Diane Rodriguez traces its history through the eyes of two journalists who leave their comfortable middle class life in San Jose to volunteer for El Malcriado, the underground newspaper founded by Chavez and Dolores Huerta.  The Latino Theater Company in association with El Teatro Campesino presents the world premiere of ‘The Sweetheart Deal’ May 4 through June 4 at The Los Angeles Theatre Center, 514 S. Spring St., Los Angeles, CA 90013; $22- $52; For reservations and information, call (866) 811-4111 or go to http://thelatc.org.

RSVP for World premiere "The Sweetheart Deal" at LATC to add comments!