Barbecue Heaven is in Culver City 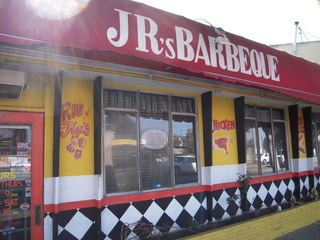 J.R.’s Barbeque was not started by a television chef. The restaurant has no corporate backing, celebrity owners, or designer pedigree. They don’t serve food made into foam or frozen in liquid nitrogen. The décor isn’t toney, the location isn’t trendy, and the clientele isn't hip.

None of which matters, of course, because their barbecue is so good.

If you’re looking for a macrobiotic menu of humanely harvested soy products, keep looking. But carnivores, take notice. If luscious, drop-off-the-bone pork ribs dripping in a thick, smoky-sweet sauce sounds good to you, then welcome to barbecue heaven.

Pork, beef and chicken are the stars of the show at J.R.’s. The meats are smoked, dry-rubbed before heating, slow-cooked in a barbecue pit, and served in an earthy, tomato-based Memphis sauce that ranges from a sweeter mild variety to a house-made hot sauce that is exactly as hot as it should be. I recommend getting the mild or medium and asking for hot on the side until you’re sure it’s not too fiery for you.

I’ve sampled all the dishes at J.R.’s, and the pork ribs are the best: meaty, succulent, and tender. When I asked the owner, Robert Johnson, to name his favorite dish, he didn’t hesitate.

“The pork ribs, without a doubt.”

Among its side dishes, J.R.’s beans are the revelation: rich and spicy, with juicy nuggets of smoked pork meat. The cole slaw, macacroni and cheese, and potato salad are serviceable, but when it comes to barbecue, sides are beside the point. If the barbecue is bangin', I’ll forgive some bland sides, but if the meat is mediocre, the best beans in the world won’t bring me back. And really, why take up space in your stomach that could be filled with more meat? To understand why J.R.’s barbecue tastes so authentic, you need to know a little about the people behind it, the J and the R: Jeanie Jackson and her son Robert Johnson. “Tender As Mother’s Love” is the restaurant’s fitting motto, as the business was created and sustained by a mother’s hard work, devotion, and love of barbecue.

Robert Johnson’s barbecue journey began when he was a teenager in Los Angeles in the early 1970s. His mother sent him to work summers at a hard-driving Uncle’s barbecue joint in Memphis. At the time, Robert considered it a punishment, but now appreciates the skills and discipline he learned at his own barbecue boot camp.

“I did everything from skinning meat, to cooking it, serving it, working the cash register, bussing the tables…I literally had to do everything. And I hated it. My Uncle was no-nonsense. But when I look back in retrospect, I’m forever grateful. He taught me…an art, a trade. He also taught me respect and integrity.”

Years later, when Robert had a good job working for the City of Memphis, his mother called asking him to return to Los Angeles to help her start a Memphis-style barbecue restaurant. Jeanie was 60 years old at the time. Robert dutifully moved back to Los Angeles to help her set-up shop, but he gives his mother full credit for building the business.

“She’s the one who really made this place what it is. If you had seen this place, it was a complete dump…She fixed up the whole thing.” Jeanie even painted the original cartoon food drawings on the building’s exterior.

It took a great deal of vision and faith to believe the space was going to work. J.R.’s is located in a drive-through industrial zone, far from residential neighborhoods, pedestrian traffic, or any reason you would put a restaurant there. Robert says the original tenant was a failed hamburger place with the motto, “The best hamburgers at the worst location.” 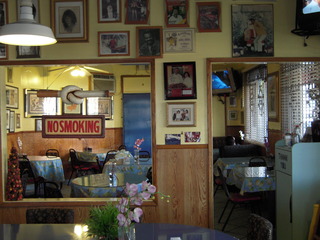 “I remember the first year, first two years, I said to her, ‘I don’t think I want to do this. We’re spending our money and we’re not making any.’”

Help came just when they needed it. In 2001, respected food critic S. Irene Virbila reviewed J.R.’s for the Los Angeles Times Magazine. Robert and Jeanie were put on the cover wearing chef’s whites, Robert holding a massive tray of barbecued meat. Other reviews and publicity followed, including a segment on the Food Network in 2003.

“That’s when it seemed like things started to happen. Just when I thought, ‘Well, maybe people don’t like our food,’ we’re on this run.”

The media has mostly moved on but J.R.’s has remained, serving the same honest, consistent, delicious food. Robert has taken over the business, but Jeanie, now 72, still comes in to make some desserts and side dishes, and every year throws a gumbo party at her house for the restaurant’s regulars.

J.R.’s is also one of the best values in town. For the cost of a dinner at one of Culver City’s higher-prices eateries, you could feast for a week at J.R.’s.

I’m not sure what makes a restaurant an “institution,” but after 12 years of serving some of the best barbecue in Culver City, I nominate J.R.’s. There are many exciting new restaurants in town, but sometimes it’s worth remembering the great ones that have been with us all along.

Does not get much better locally than J.R's. Nothing like sitting at the counter with a friend splitting a half rack of the beef ribs and a half of baby backs washin' them down with an Arnold Palmer.

Bella Stewart is now a member of Culver City Times
2 hours ago
Welcome Them!