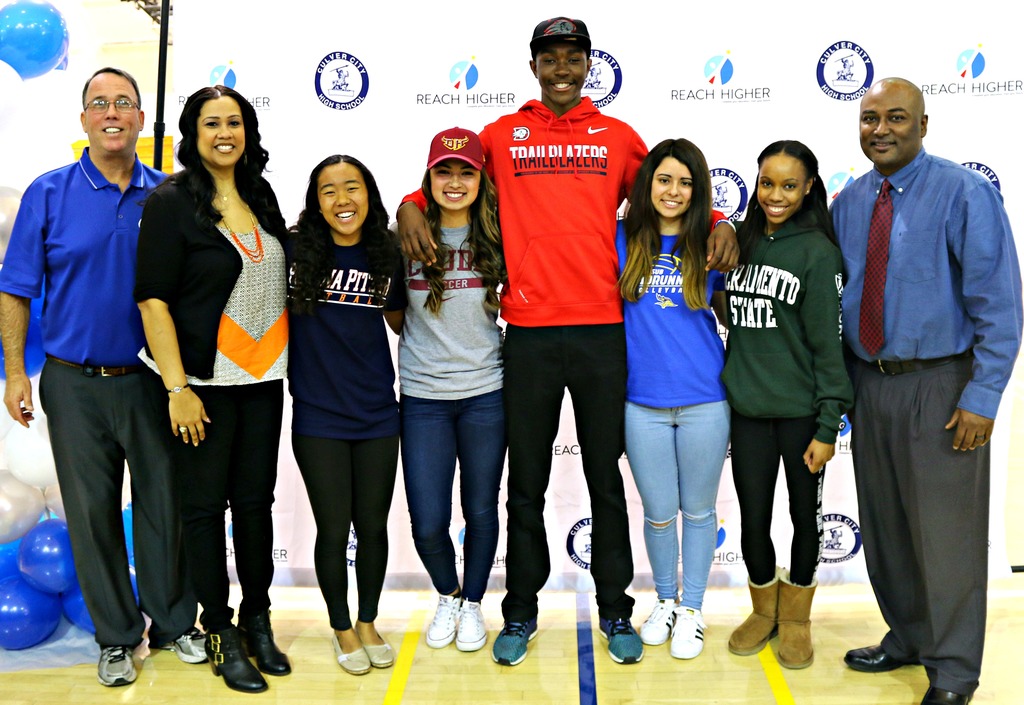 Krista Hernandez, the star libero for the Centaurs’ girls volleyball team, signed her letter of intent to play at California State University, Bakersfield. The 5-foot-5 Hernandez is Culver City’s most decorated player and led the Centaurs to the school’s first ever CIF Volleyball Championship. Hernandez has been a part of the USA HP program for five years. In 2016, she was named to the USA Volleyball High Performance Indoor Women’s’ Junior A1 National Training Team after being name an alternate to the 2014 and 2015 teams. Hernandez was also named in the 2014 edition of the AAU Best Volleyball Players book. She helped lead her Culver volleyball club team to SCVA Division 1 Gold in 2013, which was a first for the club. Hernandez was also named to the 2015 All-CIF team, earned first-team, All-Ocean League honors and was selected by her teammates as both captain and MVP.

“Volleyball has been a part of most of my life,” she said. “I have learned discipline and time management in order to keep up with my studies and still compete in volleyball. My experience, work ethic and drive are skills I believe will allow me to achieve any goal I set my mind to, in school, in life and on the court. Being a team sport, I enjoy the camaraderie and the effort required to achieve a common goal. I also feel, and have been told by my coaches, that my character and on court skills give me the necessary qualities to step into a leadership role in a team environment. Academically, I have earned top grades and scholastic awards while continuing to play on both my school and club teams. I have been on the honor roll throughout middle school and high school.”

Danielle Martinez, captain of the Culver City girls soccer team, signed her letter of intent to play for the Toros at California State University, Dominguez Hills. Martinez, a star on defense, earned second-team Ocean League honors during the 2016 season and will join a CSUDH team that has struggled lately, but has a storied history that includes a National Championship, four Final Four appearances and six CCAA Championships.

Jordyn Brent, a level 10 gymnast, signed her letter of intent to compete for the Sacramento State University women’s gymnastics team. Brent started gymnastics when she was seven years old at Fit Kids Gymnastic Center, where she trained under coaches Olivia Beltran and Chris Olsen. She began training at All Olympia Gymnastics Center (AOGC) after her level 7 season in 2012.

She trains 26 hours per week at All Olympia Gymnastics Center (AOGC) in Los Angeles, under coaches Galina Marinova and Marcello Figueiredo. Brent would like to qualify to the Junior Olympic Nationals as well as to continue her gymnastics journey at the collegiate level.

Mariko Rooks, right-fielder and reserve catcher, signed her letter of intent to continue her softball career at Pomona College. The left-handed star for the Centaurs has maintained a 4.4 GPA at Culver City High School and will hopefully play a key role in the resurgence of the Sagehens, who finished last season with a 14-26 record.

Deven Osborne, the Centaurs’ star wide receiver, signed his letter of intent to play football at Dixie State University in St. George, Utah. The 6-foot-8, 190-pound route runner caught 18 passes for 237 yards and seven touchdowns during his senior year, improving upon his junior season during which he notched 18 catches for 184 yards and five touchdowns.

“We are proud of all of our student-athletes and wish them well as they take on the challenges of continuing their athletic careers at the college level,” said Athletic Director Tom Salter. “Go Centaurs!”

For a video of the event, please visit https://youtu.be/pfGFaeDmnoI