“Thank you all for coming,” he told the crowd of more than 200 people perched atop the nearly finished building with a gorgeous view of the Culver City skyline. “I appreciate all your support and promise that I will continue working for you and with you to make Culver City the best it can be. Special thanks to Frederick and Laurie Samitaur-Smith and Eric Owen Moss for their incredible hospitality and to Kurt Kratchman and Michael Hackman for their amazing support. Thank you, too, to the many, many volunteers who helped make sure the event looked great and went off without a hitch!” 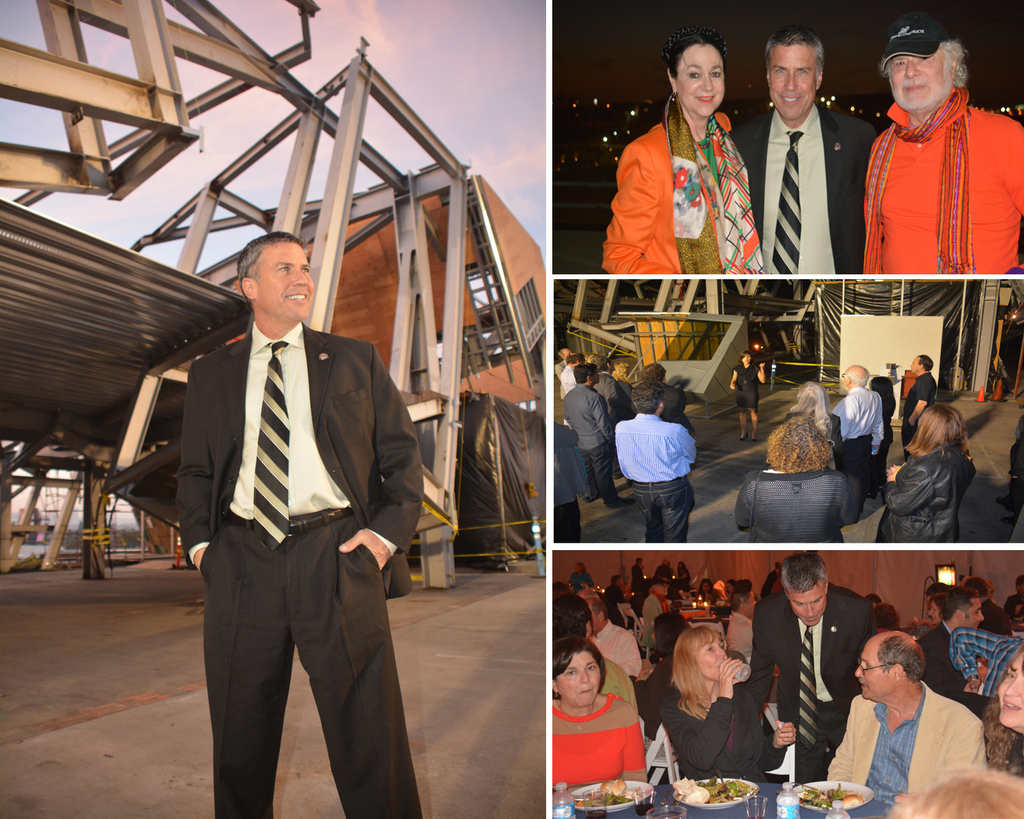 Cooper said he chose the location because it represented both the past and the future of the city. The Hayden Tract was once a seedy collection of rundown warehouse buildings that has been transformed into one of Southern California’s hottest creative office markets. He said the area’s turnaround represents a renaissance that is occurring throughout the city.

“It was humbling to stand in the midst of the Pterodactyl building under construction and look out across the Culver City skyline,” Cooper said. “I thought about how far we've come in the past four years - creating more affordable housing, opening our Expo line station, attracting a long list of new businesses to Culver City and making some important changes that will keep our city on firm financial footing going forward.”

“But I also thought about the future, about the amazing things that we can do by working together. We can make our city even greener. We can attract even more cutting-edge businesses. We can improve our quality of life. I am honored to be Mayor of such a special place, and I hope you will continue to support me as I seek four more years to work hard for our city.”

A nearly 25-year resident of Culver City, Jeff Cooper is a businessman and a community leader with a track record of fighting for Culver City's neighborhoods.

As Mayor, he led the charge to fight the dangerous practice of fracking, encouraging the State of California to put a moratorium on fracking until it develops guidelines that guarantee safety for our residents. Jeff took a leadership role in creating the city’s ban on single-use plastic bags. He helped lead the effort to create Tilden Terrace – a mixed-use and affordable housing project that, for the first time, allowed Culver City to fulfill its affordable housing requirement. He led the City Council effort to institute new measures to reduce cut-through traffic in Sunkist Park.

Jeff has spearheaded the effort to eliminate bullying on our parks and playgrounds and has worked hard to promote public safety, protect the environment and make sure City Hall listens when residents speak.

Jeff voted to reduce the City Council's own medical benefits, eliminating the decades-old policy of providing lifetime benefits to council members. He joined his fellow City Council members in renegotiating contracts with all city unions to reduce benefits and pensions – a move that saved our city millions of dollars at a time when every penny counts.

Jeff believes that the City should make public safety a top priority and joined the City in unveiling the State of California’s first Smart911 system – a technology that allows residents to give authorities a “safety profile” that will be displayed to 911 operators during an emergency. Jeff has been a champion for the environment, pushing the city to continue its commitment to compressed natural gas (CNG) for our transportation fleet, redesign its fleet utilization and replacement program and earn the ranking as the No. 1 municipal transportation fleet in the country.