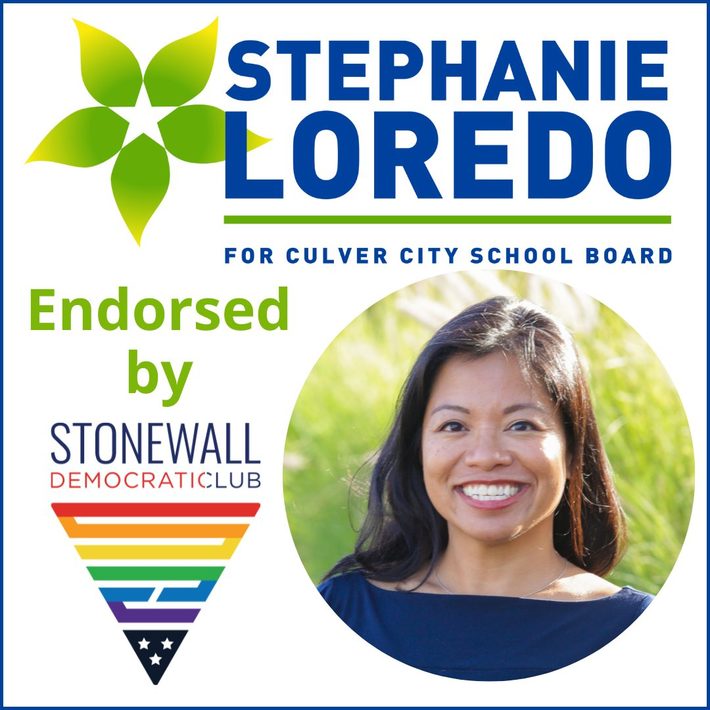 Stephanie Loredo (https://stephanieloredo.com), an advocate for education, sustainability, and diversity, equity and inclusion (DEI), today announced she has been endorsed by Stonewall Democratic Club. Stephanie is a candidate for Culver City Unified School District (CCUSD) Governing Board Member. Founded in 1975, the Stonewall Democratic Club (https://www.stonewalldems.org) is the nation’s oldest LGBTQ+ and feminist political advocacy organization and endorses in races in Los Angeles County, California, and nationwide.

The Stonewall Democratic Club (Stonewall) is the home for progressive Democrats who are lesbian, gay, bisexual, transgender, and straight allies of the LGBT community. It was founded in recognition of the growing awareness within the Democratic Party that lesbians, gay men, bisexuals, transgender, queer/questioning, intersex, and asexual people (LGBTQIA) should be fully and equally represented in the community and the national body politic. Its purpose is to make the Democratic Party, the body politic and its elected officials, responsive to and responsible for the needs of all people, particularly the LGBTQIA and feminist communities.

“Stephanie Loredo has a deep commitment to the children, families and staff in Culver City schools. Her appointment to the school board would be an important win for representation on behalf of the LGBTQ and Filipino-American communities,” said Alex Mohajer, president, Stonewall Democratic Club. “Stonewall Democratic Club believes that Stephanie will give voice to marginalized populations and be an influential champion for LGBTQ+ students and staff in the Culver City school district.”

Stonewall seeks to eliminate discrimination based upon real or perceived sexual orientation, gender identity/expression, race, age, and/or disability. It promotes freedom of choice and human and civil rights, and pursues economic and social justice for all people. Stonewall promotes legislation in conjunction with its goals and purpose, and vigorously opposes legislation which oppresses and/or restricts basic human rights. In pursuit of its goals, Stonewall works within the Democratic Party and other institutions.

“I have immense appreciation for Stonewall Democratic Club and its endorsement of my campaign. The energy it puts behind candidates and legislation have made a positive impact on the interests of LGBTQ+ people and the intersectional communities that share our challenges,” said Stephanie Loredo. “I am committed to fostering an empathetic and inclusive mindset that serves everyone in Culver City, especially marginalized student groups. I want to normalize a school culture that intentionally protects youth from bias and harassment, so that they can envision a joyful future and occupy space as leaders in the community.”

Stephanie’s vision for public schools resonates with national progressive organizations that are advocating for equality. Public schools are foundational to thriving, healthy communities. Stephanie is focused on empowering marginalized voices and removing barriers to participation so that the LGBTQ+ community and others will be represented for consequential decisions for students, staff and families. She is committed to developing an environment in CCUSD that affirms identities where everyone feels safe, heard, validated and supported to achieve.