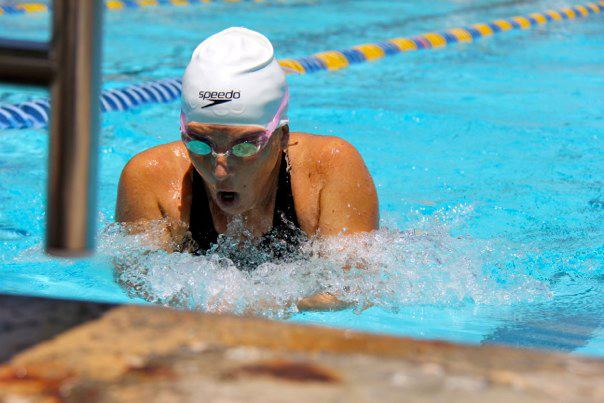 Pescatori, 45, was heartbreakingly close to competing in the Olympics for her native Italy. She placed third in the 200-meter breaststroke in the trials both in 1988 and in 1992-just missing the team by one spot! Now, the mother and part-time swim coach approaches competitions differently.

“The atmosphere at the local meets is friendly, and there is no pressure,” Pescatori said. “Anytime you finish a race you win. I should’ve taken that attitude when I was younger. I would’ve performed better.”

Pescatori coaches twice per week for Southern California Aquatics (SCAQ) in El Segundo. A group of her swimmers are interested in competing, and she is creating a blog to encourage more to join them: competitivescaq@blogspot.com.

Chris Wall, 54, who came into SCAQ with no swimming experience, said the environment at the meets is “very encouraging” for all levels of swimmers.

Wall started up with SCAQ at the Culver City Plunge in 2007 and credits the club with changing his lifestyle. Though he used to run track in college, he found he could no longer run the way he used to and decided to try swimming, an exercise that does not put weight on the joints. Wall realized that he missed competing, and he’s now participated in about 25 meets. Despite picking up the sport in middle age, he has had several breakout performances. In 2013, he placed third in his age group for the 50 free at Nationals, and in 2014, his relay placed first, also at Nationals.

Both Wall and Pescatori view swimming as a stress-reliever from the busy day.

“I swim when I need to vent my pent-up energy. It’s exercise for every part of the body. You work out everything in an hour, and when you’re done, you’re also clean,” Pescatori said.