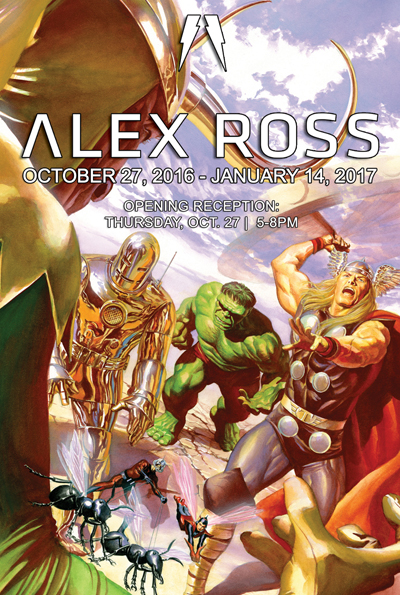 From caped crusaders to costumed web-slingers, the Wonderful World of Animation Art Gallery is excited to present a collection of art for sale by renowned comic artist and talented illustrator Alex Ross!

Often referred to as “the Norman Rockwell of comics”, Ross is known for his vibrant photorealistic renderings of classic comic characters such as Superman, Wonder Woman, and Captain America. Ross first established himself in the 1990s with Marvel Comics and holds an integral and respected presence in the comic book industry, his work bridges the union between fine art and comics.

With the opening just before Halloween, the gallery will also host a superhero costume contest opening night. One lucky winner will receive an exclusive Alex Ross limited edition piece of art.

Open to the public, the gallery reception is from 5-8PM on Thursday, October 27th. The exhibit will run through January 14, 2017.

Susan Johnston has been accepted to Rolling Stone Culture Council, a community of thought leaders and tastemakers shaping industry futures. at Los Angels