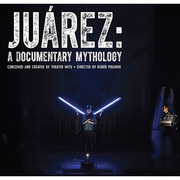 Juarez: a Documentary Mythology incorporates verbatim transcripts garnered during a three-year series of interviews and investigations to create an artful yet devastating portrait of two cities — Cd. Juárez, which emerged in 2008 as the “Murder Capital of the World,” and, directly across the border, El Paso, TX, named the “Safest Large City in America.” Gangs, cartels, corruption, NAFTA, femicide, the War on Drugs, familial honor, mythology and hope all appear in stories collected from parents, politicians, artists, activists, factory workers, journalists, professors and more. Mitu’s stylized, inventive take on documentary theater draws on their own Whole Theater methodology and pairs it with engaging research material – augmented by audience engagement with the project’s interview archive and a multimedia art installation drawn from the same materials.

“A lot of our work deals with theatricalizing belief systems, spiritual questions and mythology,” Polendo explained in an interview with the San Francisco Examiner. “When you hear a complicated story, there’s a desire to simplify it and make it a metaphor for good vs. evil or something of the sort. We hope with this theater piece to move closer to looking at one of those really rich complex Greek mythologies that is riddled with all the goods, bads and gray areas of humanity.”

A NY City-based experimental theater company, Theater Mitu is a permanent group of collaborators committed to expanding the definition of theater through methodical experimentation with its form. Driven by a theory it calls “Whole Theater” — defined as a theatrical experience, which is rigorously visual, aural, emotional, intellectual and spiritual all in the same moment — the company investigates global arts practice as a source for its research, training, laboratory and creation methodologies. Mitu’s work has been developed and presented at theatres around the world.

RSVP for 'Juarez: A Documentary Mythology' at LATC explores stories of US/Mexico border to add comments!