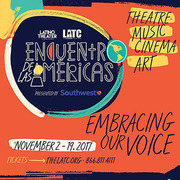 Fourteen companies from the U.S. Canada, Mexico, Cuba, Peru and Colombia  celebrate dynamic, contemporary Latinx and Latin American theater during a three-week festival, with five performances presented simultaneously every Thursday, Friday, Saturday and Sunday in the five performance spaces that make up The Los Angeles Theatre Center. An additional 12 Los Angeles-based artists will be represented in Patas Arriba (“Upside Down”), a late night “micro-theater festival” set to take place in the “belly” of The LATC, where audiences will cycle through the non-traditional performance spaces of the building — Vault, Conference Room, Green Room and Tunnel — to experience four 15-minute works during each hour-long performance. A free Cinema & Music mini-festival on Tuesday and Wednesday nights will pair musical performances with screenings of soon-to be-released films, including Chavela, a new documentary about Costa Rican-Mexican singer Chavela Vargas and NALIP, an evening of short films followed by a concert by Spanish singer Patricia Kraus in her American debut. Produced by the Latino Theater Company in association with Latinx Theatre Commons. Nov. 2 through Nov. 19 at The Los Angeles Theatre Center, 514 S. Spring St., Los Angeles, CA 90013; $20-$44; To find a complete list of events and a schedule, call (866) 811-4111 or go to http://thelatc.org.