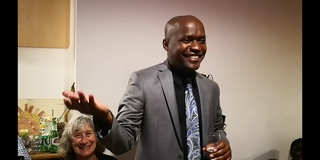 A video feed of five people passing papers around a conference table wouldn’t gain much attention on most nights. But this was April 10th – the night the City Council ballots were being counted at City Hall. The five people at the conference table were Culver City staff independently verifying every vote that was cast. The people paying attention were at Daniel Lee’s election party. Or wake, depending on the outcome. The event would either end with a room full of ecstatic people hugging, high-fiving, and toasting their win, or like a party on the Titanic, the ship would go down, and people would be crying into their champagne flutes.

For the duration of the ballot counting, it was hard to tell which ending this movie would have. Four candidates – Daniel Lee, Alex Fisch, Marcus Tiggs, and Albert Vera – were vying for two open seats to replace outgoing Mayor Jeffrey Cooper and Council Member Jim Clarke on the five-member City Council. As many observers expected from watching his strong campaign, Alex Fisch was comfortably in the lead the entire night, securing the first of the two open spots. The battle was for second place, to see who would get the other one.

It was neck-and-neck through the night as Daniel Lee and Albert Vera each came close to winning at times. At the end, Lee finished 170 votes ahead of Vera. With the count of additional provisional and vote-by-mail ballots on April 16, Lee had pulled ahead by 212 votes, capturing 3,335 votes. Alex Fisch was the front-runner with 3,819 votes, Albert Vera came in 3rd place with 3,123, and Marcus Tiggs, in the 4th position, had 2,189. By the end of the count on April 16, the City Clerk announced that the race had attracted 26.79% of registered voters, a higher turnout than in recent elections.

Lee’s victory was a landmark for Culver City as he will be the first African-American to serve on the Council in the city’s 100+-year history. Lee expressed his hope in a recent interview in the Warren SZ blog that his presence on the Council will inspire other people of color to participate in local government.

As one of the most progressive candidates in the race, Daniel has emphasized environmental issues, affordable housing, fairness and accountability in his campaign, and stressed in a speech given on election night that he plans to work for everyone in the community. “We fully intend to represent all of Culver City,” Lee told the crowd. “The homeowners, the renters, the affluent people, the middle-class people, the immigrants, the homeless…We’re here to listen to everyone.”

Council Member Meghan Sahli-Wells, who along with Vice Mayor Thomas Small and Council Member Göran Eriksson will serve on the Council with Daniel Lee, said about his win, “Daniel is devoted, disciplined, and ready to lead. We’re lucky to have him on the City Council, and I look forward to working with him on a range of issues.”

Daniel Lee and Alex Fisch will be sworn-in as new City Council Members in an event on April 30, 2018, at 7:00 pm, in the Mike Balkman Council Chambers at City Hall, 9770 Culver Boulevard, Culver City, CA 90232. The public is welcome to attend.

Our Man In Santiago at Theatre West