Only 8 Performances Left of OY! at the Actors' Gang in Culver City 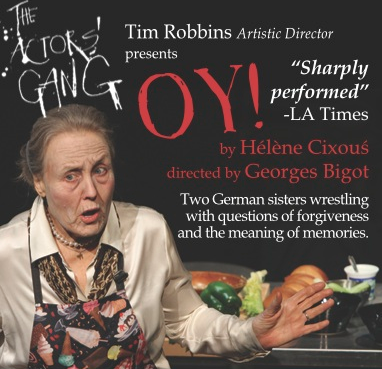 In July of 2013, the Actors' Gang premiered OY!, the work of author, professor, theorist and critic Hélène Cixous, best known as a playwright of epic work with Le Théâtre du Soleil. Now the play is returning to the Actors' Gang, starting September 19 and running through October 20.

The story of two German Jewish sisters who compare memories of their experiences of the period of Nazism in Europe, here's how the Actors' Gang describes the work:

Through Oy, playwright Hélène Cixous interrogates the question of forgiveness, the work of memories and transmission to new generations, and the state of modern racism throughout the world. Two German sisters have accepted an invitation from the mayor of Osnabrück, the city of their youth in Germany to testify about their experiences before the younger German generation.  Upon returning to Paris from Osnabrück, the elderly sisters try to make something of the swirl of emotions, opinions and memories that have surfaced.  As they cook in the kitchen together, they talk about all the things they were not able to express in Osnabrück.  Through their simple, flavorful work together, they begin to unravel the complexities of a society’s internalized racism – the broad anti-Semitism that so darkly colored their past.  Based on close family members of the playwright, the interaction between these fictional sisters is honest, emotional, humorous and compelling.

OY! plays Thursday and Saturday evenings at 8 pm – as well as a 2 pm matinee on Sundays.  Tickets for all shows are $20 tickets in advance, but Thursdays are Pay-What-You-Can.  For tickets, click HERE.

HERE's what the LA Times had to say about the play:

All the best stories are told in the kitchen — even the darkest ones. Think of Hélène Cixous’ “Oy!,” now at the Actors' Gang, as the rise and fall of the Third Reich as told by your eccentric aunts, who happen to be whipping up liver pâté and a little gossip....Cixous, an icon of feminist theory, wants to take us out of the museums and even the camps, to shake up our dutifully received ideas about the Holocaust...“Oy!” is an offhand conversation about the unspeakable, sharply performed by two engaging actresses.

The Actors Gang is located in the Ivy Substation at 9070 Venice Blvd.