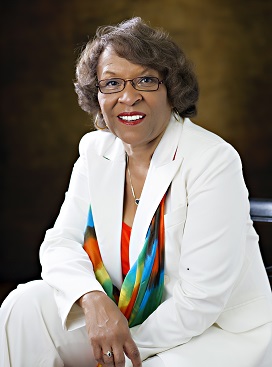 Culver City, CA - Written by author Sharon M. Draper, Stella by Starlight is a children’s book that tells the tale of a young girl living in South Carolina during the Depression-era, and is the winner of Antioch University Los Angeles’ ninth annual Horace Mann Upstanders Book Award. The award is given by AULA’s Education Department and will be formally presented on May 21 at the 2016 Upstanders Book Awards Ceremony at the Del Rey Beach Yacht Club.

“An Upstander is a person or a group who chooses to take a positive stand and act on behalf of themselves and others. These awards honor literature that encourages readers to take that risk and stand up for something they believe in,” said Dr. J. Cynthia McDermott, chair of AULA’s Education Department.

Draper is an educator and New York Times bestselling author of more than 30 written works that include novels, poetry and support books for teachers. Her past awards include a Kirkus Star review and the Margaret A. Edwards Award for her long-time contribution to writing for teens. She is a two-time winner of the Coretta Scott King Literary Award and lives in Cincinnati, Ohio where she taught high school English for 25 years, earning her a National Teacher of the Year Award. Actively involved in encouraging and motivating all teachers and their students as well, she has worked all over the United States, and in Russia, Ghana, Togo, Kenya, Ethiopia, Bermuda, and Guam, spreading the word about the power of accomplished teaching and excellence in education.

Draper’s literary recognition began when, as a challenge from one of her students, she entered and won first prize in a literary contest, for which she was awarded $5,000 and the publication of her short story, One Small Torch.

Stella by Starlight, is a historical fiction novel about a young girl and her brother who live in racially segregated North Carolina during the Depression. They witness the unspeakable actions of the Klu Klux Klan that sparks a story of strength and ambition in a time that is critical and dangerous of those traits in a girl of color. Stella by Starlight was published in the United States in 2015 by Atheneum. It was named one of the Best Middle Grade Books of 2015 by Kirkus and one of the Notable Children’s Books of 2015 by the New York Times.

Fugate is the owner of EsoWon Books, an independent bookstore and staple of the literary and arts community in historic Leimert Park in Los Angeles. Home to book readings, expertly curated book lists for readers of all ages, he is often referred to as “a treasure in the African American community.” Fugate opened the store in 1990 with his partner Thomas Hamilton, and since then the store has hosted notable authors such as President Barack Obama, former President Bill Clinton, film director Spike Lee, and renowned poet Maya Angelou.

Established in 2008, the Horace Mann Upstanders Book Awards honor children’s and young adult literature with characters who recognize injustice and take action to correct the wrong. This award honors new children’s literature that best exemplifies the ideals of social action and in turn encourages young readers to become agents of change themselves by standing up to injustice.

Antioch University Los Angeles (AULA) provides a rigorous progressive education to prepare students for the complexities of today’s diverse societies. AULA, a not-for-profit institution and part of the Antioch University system, has served the greater Los Angeles area for more than 40 years. The core values of social justice, service to the community, and lifelong learning lie at the heart of the BA degree completion program and graduate programs in Nonprofit Management, Education and Teacher Credentialing, Psychology, Creative Writing, and Urban Sustainability. The Education Department at AULA offers a Preliminary Multiple Subject and Education Specialist Mild/Moderate Credential with an option to add a Masters of Arts in Education. The Education Department also offers a Masters of Arts in Education, Leadership and Change and the Clear Credential.

Inspired by the work of pioneering educator Horace Mann, Antioch University provides learner-centered education to empower students with the knowledge and skills to lead meaningful lives and to advance social, economic, and environmental justice. With campuses in Keene, New Hampshire; Los Angeles; Santa Barbara; Seattle; Yellow Springs, Ohio; and online at AU Connected, Antioch University is a bold and enduring source of innovation in higher education. The University is accredited by the Higher Learning Commission.