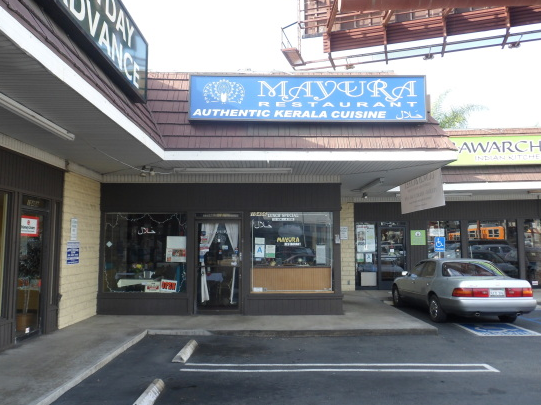 Last Thursday, the Los Angeles Times ran a special section devoted to restaurant maven Jonathan Gold's 101 Best Restaurants in Los Angeles. Ever the iconoclast, Gold called out at least two restaurants that are (mostly) off most people's Culver City radar. "Classical technique is important," Gold says in the article, "but not more important than pleasure, than authenticity of purpose, than commitment to seasonal, sustainable cuisine." With these as the criteria, here are the three restaurants cited by Gold:

An Indian restaurant in an unassuming Venice Blvd. strip mall, this is one of the list's surprises. Although maybe it shouldn't have been a shocker, since earlier in the year, Gold had lauded attention on the restaurant, which specializes in the cooking of Kerala, a region on south India's Spice Coast. Says Gold in the article: "Even if you have eaten in other local southern Indian restaurants, a lot of the food may be new to you: saucer-shaped rice-flour saucers called appam; an obscurely flavored fish curry with undernotes of tamarind and garlic; the peppery, buttery cashew-rice dish ven pongal; or even avial, a Kerala-style dish of julienne vegetables sautéed with coconut, as useful as a condiment as it is satisfying as a main dish." Mayura is located at 10406 Venice Blvd.

Here's the other left-field inclusion on Gold's list: a tempura restaurant in the food court of Mitsuwa Market! Says Gold, "If you are a strict empiricist, the sauce-brushed tempura on the tendon, rice bowl with tempura, basically the only dish here, may seem to lack the crispness and the featherweight crunch that you might expect from a branch of a famous Tokyo tempura bar. But Hannosuke's aesthetic takes hold in an instant. That slightly sogged-out crunch — it's still really crunchy, expressive of the roasty, nutty flavors of the expensive sesame oil used for frying, of the subtle sweetness of prawns and Tokyo eel." Mitsuwa Market is located at 3760 Centinela Blvd. The third slot went to Lukshon in the Helm Complex: South-East Asian cuisine from one of L.A.’s most celebrated chefs, Sang Yoon. Says Gold in the article, "...Yoon is important. The whole gastropub phenomenon stems directly from his Father's Office. And Lukshon, his pan-Asian restaurant, is perfected in a hundred little ways that escape the casual observer, including the precise acidity of the sticky Chinese pork ribs, the aromatics in the reinvented Singapore Sling and the deconstructed shrimp toast, which he turns inside out by dredging delicate cylinders of chopped rock shrimp in tiny croutons, then deep-frying them to a delicate crunch." Lukshon is located at 3239 Helms Ave.

Why is this titled 3 Culver City restaurants when only 1 of them is actually in Culver City?  Mayura is in Palms - http://palmsla.org/about-palms/maps/

Comment by Diane Williams on June 5, 2013 at 8:43pm
Lukshon is absolutely fantastic! I'm glad it made on the list.

How can Johnnie's and Tito's NOT be on his list?    People travel from miles around, even out of state, to eat there.